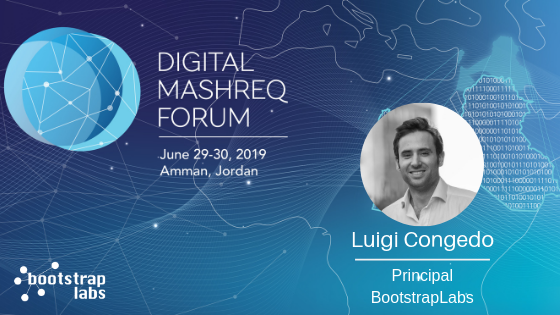 Luigi Congedo, Principal, at BootstrapLabs, will be speaking during the Digital Mashreq Forum, hosted under the patronage of HRH Crown Prince Al Hussein Bin Abdullah II, the Ministry of Digital Economy and Entrepreneurship in Jordan, and the World Bank Group.

Luigi will share his story and explain how BootstrapLabs has become a leading Venture Capital firm in Applied Artificial Intelligence, and how the firm helps startups to successfully scale globally from Silicon Valley.

This two-day high-level event will serve as a platform to discuss the role of digitalization in shaping the region’s future through the lens of government and business leaders.

The Digital Mashreq Forum will bring together partners from governments and private sector representatives from Jordan, Lebanon, and Iraq as well as executives from international and regional businesses and investors. Many tech leaders will join Luigi on stage, including, Omar Razzaz, Prime Minister of Jordan, The World Bank Chief Economist, Rabah Arezk, Mr. Osama Al-Zoubi, Chief Technology Officer, CISCO, MEA, Mr. Diego Massidda, CEO, Partner Markets at Vodafone Group, and many others.

The event will take place on June 29 and 30, 2019 at the King Hussein Business Park in Amman, Jordan.