Will Your Job be Taken Over by Robots?

In 1589, a British inventor introduced his invention, the Knitting Machine, to the Queen of England expecting to be granted a patent. Instead, she replied, “Consider thou what the invention could do to my poor subjects. It would assuredly bring to them ruin by depriving them of employment, thus making them beggars.”

The fear that technology will displace workers is not a new fear—but it is certainly a trending-fear, with a web app to match. Workers are not unfamiliar with skepticism about how new technology will change their job or make it obsolete. But the true fear the workforce has about new technology, especially automation, is not about losing a job, but about having an employable skill set. And from there, it is a slippery slope to worrying about becoming destitute.

In 2013, researchers at the University of Oxford estimated that 47 percent of US employment is at “high-risk” for complete automation within two decades. Should their estimations be correct, we can expect that roughly 65 million Americans will not only be out of a job, but will have been asked to leave their jobs because their skill set had become obsolete, taken over by automation. Given that these are conservative estimates, perhaps it is time to get worried.

But not so fast.

Despite the dreaded prediction, that over 500 million people worldwide will lose their jobs in the first wave of the Fourth Industrial Revolution (4IR) to automation, experts agree that people, with their inherently human social savvy and creativity, will continue to remain the main drivers of innovation.

At this year’s BootstrapLabs Applied Artificial Intelligence Conference, experts from companies working to manage the transition to automation and insiders at companies like Facebook, Adobe, and Microsoft working internally to prepare for this upcoming shift in their workplaces, will discuss the Future of Work in the Age of AI. 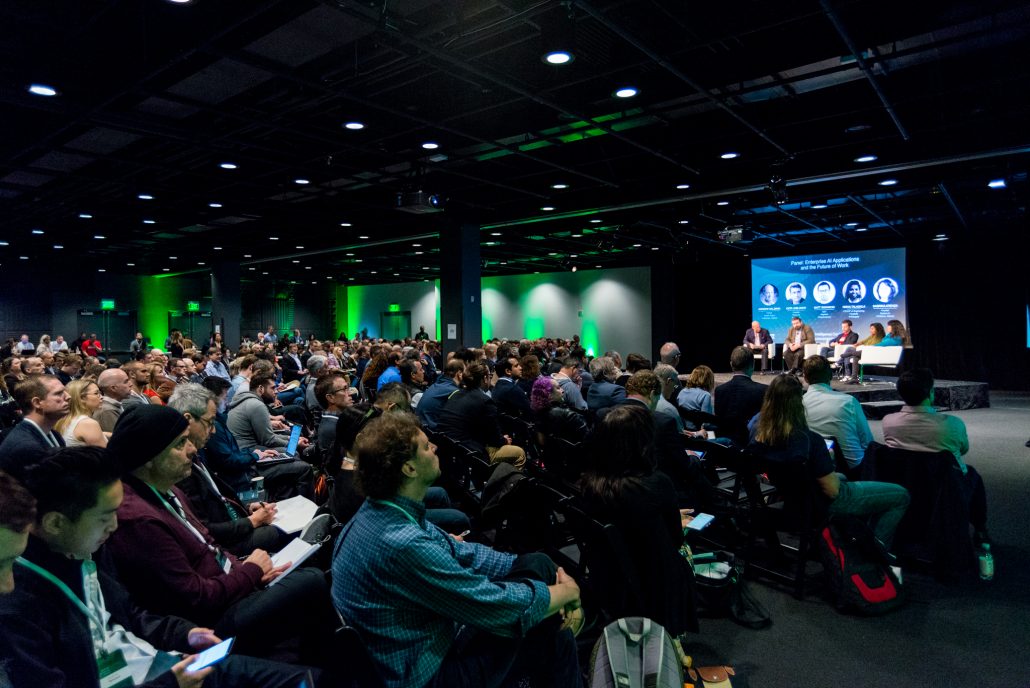 Industry thought leaders, like Oliver Brdiczka who is building Adobe’s AI assistant and Noelle LaCharite who is working to educate developers for Microsoft about AI, are dedicated to making AI understand and respond to human behavior. Rather than sacrificing human intelligence to the might of AI, as science fiction might have us believe is our inevitable future, they are focused on harnessing human intelligence. This new wave of AI, called Contextual and Conversational AI, trusts that artificial intelligence is hardly intelligent without human intelligence, cementing the future for human capital. In fact, valuing human intelligence aids in securing human capital’s place as the most valuable resource of any company.

And yet, even if human intelligence dominates work culture, the working landscape is still destined to change in the face of artificial intelligence and machine learning technology in the workplace. And it’s going to change fast. In fact, it is the industries that are most increasingly reliant on automated work, that will need to most-quickly consider how to adapt in stride with the developments of AI and how to rethink frameworks for sound management in a world of work supported by automation, lest failure. That’s where Dinkar Jain, Head of Machine Learning for Facebook Ads, is focusing his attention: the future of management and business practices in the Age of AI.

Despite the centuries-old hesitations of the labor force surrounding the adoption of new technology, historical data shows that technology has actually created more jobs than it has displaced or made obsolete.

But the big question in a time where artificial intelligence and machine learning are leading rapid developments in automation is: will it be different this time?

Find out from the experts, and learn how to prepare and transition today’s human capital into their roles of tomorrow at AAI19.

Get your tickets today, For a limited time, get 50% off on registration using promo code: AAI1950Percent