The BootstrapLabs Applied Artificial Intelligence Conference 2019 #AAI19 brought together the brightest and most experienced experts in the field of AI for an immersive day of learning, discussion, and connection.

On BootstrapWorks we have released the videos from this past conference to relive the moments and spread the knowledge around the diverse topics covered by our experts on stage.

BootstrapLabs has built a community of more than 40,000 people from over 60 countries who care about applying Artificial Intelligence to solve the hardest problems of our society.

Get access to practical wisdom on Applied AI methodologies and take advantage of AI’s powerful potential, sign up here to receive the videos directly into your inbox. 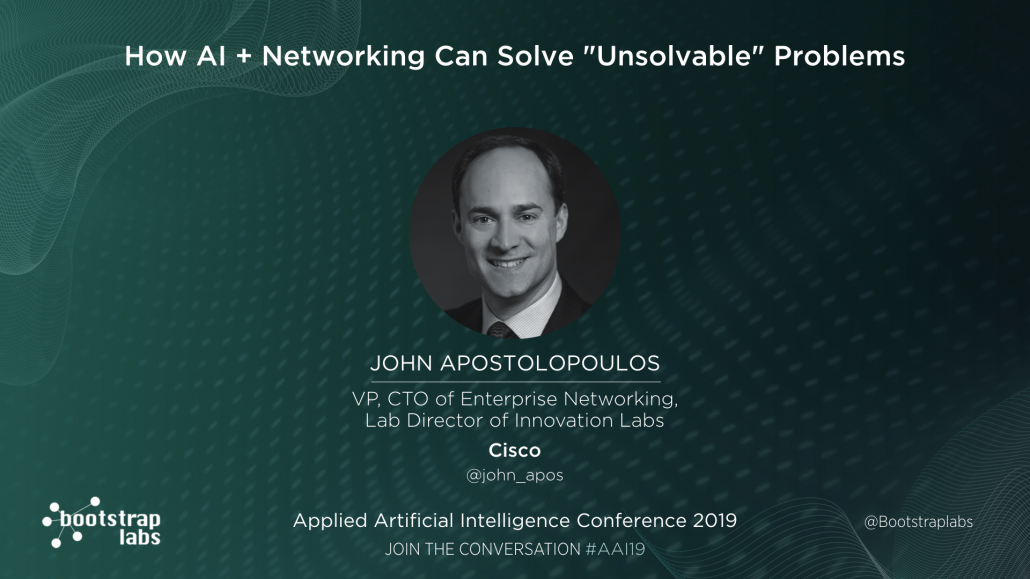 Though Applied AI is widely known for its role in facial recognition and self-driving technology, few people think of AI when they think of computer networks. As computer networks become increasingly complex, encrypted, and under attack, machine learning and applied AI is well situated to support keeping networks safe while maintaining privacy. From finding malware in encrypted traffic without decrypting the traffic to moving from Cloud-based ML to distributing ML across Edge and Cloud, applying ML and AI to computer networks can lead to improved scalability, cost, and privacy.  Join VP and CTO of Cisco’s Enterprise Networking Business, John Apostolopoulos, as he discusses the next generation of computer networking.

Some of the key takeaways from the session are:

About John Apostolopoulos:
As VP and CTO of Cisco’s Enterprise Networking Business, John Apostolopoulos is designing the next generation of computer networking. His work includes wireless (from WiFi to 5G), Internet of Things, multimedia networking, visual analytics, and machine learning. John is an IEEE Fellow and was named “one of the world’s top 100 young innovators” by MIT Technology Review, and contributed to the US Digital TV Standard (Engineering Emmy 1997). He published over 100 papers, receiving 5 best paper awards, and about 75 granted patents. John was a Consulting Associate Professor at Stanford and received his B.S., M.S., and Ph.D. from MIT.