There has never been more awareness, anticipation or support for innovation and technology to drive a cleaner, more sustainable future. Venture capitalists alone have invested over $53Bn last year in Climate and Energy technologies, making it one of the faster growing segment of the market. This is 2.5x more than pre-pandemic level, and 23x more than a decade ago.

What for some might feel like a hyped-up, valuation toppy, over-capitalized greenwashing machine is really just the beginning of a global re-allocation of talent, capital and data into technologies and companies that will power a critical decade of climate adaptation and mitigation activity without a moment to spare.

The US’ decision to rejoin the Paris Agreement, followed by COP26, the highest profile meeting of its kind in history, combined with massive public awareness and pressure for countries and companies to make firm and ambitious commitments has raised the stakes for Climate Tech, aka CleanTech, like never before. Especially with the recent passages of the Chips & Science Act and the Inflation Reduction Act, federal funding is rapidly increasing in this area with multiple new eligible programs from the NSF, NIST, DOD, DOE, and others anticipating releases of proposal requests soon.

BootstrapLabs was among the first to track how AI would impact Climate and Energy sectors, but sometimes innovation is not coming fast enough..so in addition to allocating millions from our new Applied AI Fund III into startups applying AI to solve these problems, we have decided to launch our own studio to incept new companies addressing some of the major challenges society is facing.

So unless we all want to go live on Mars with Elon and friends, and to use a quote from the movie the Martian, “we need to science the &%$# out of these problems NOW”. 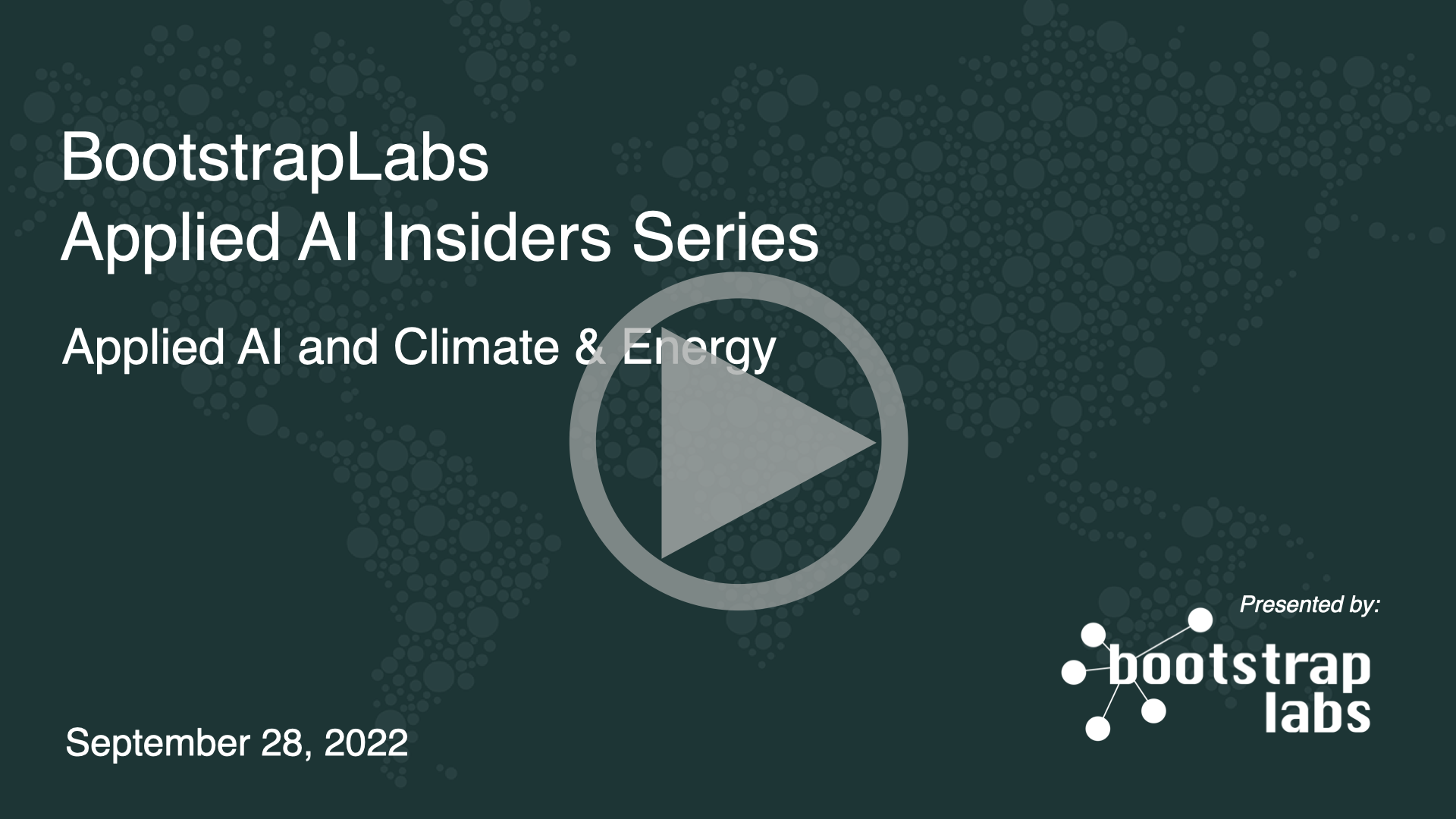 Join us for a conversation with the new Head of BootstrapLabs’ Venture Studio for Climate and Energy, and Michelle Moore, the CEO of Groundswell, a non-profit that is focused on building community power. Learn and discuss with your peers how Artificial Intelligence is going to be applied to address some of the major challenges and opportunities facing us as we transition to clean energy infrastructure, decarbonization, and circular economy for a more sustainable future.

The Supply Chain and Logistics sector is an enormous market that accounts for nearly $10 Trillion globally, or 10% of the global GDP. Last year, venture capital investments in the supply chain sector reached an all time high of $11.3B and 2022 shows no sign of slowing down as the next generation of supply chain technology and infrastructure is being re-invented.

The lack of visibility and historically slow adoption of automation in the sector created dramatic delays across all industries, which were only magnified by government lockdowns and labor shortages during the pandemic.

Come join us for a conversation with two executives from BootstrapLabs’ portfolio companies and learn how Artificial Intelligence is helping businesses face some of their vulnerabilities, increase workers’ performance, and ultimately contribute to the recovery of the global economy. 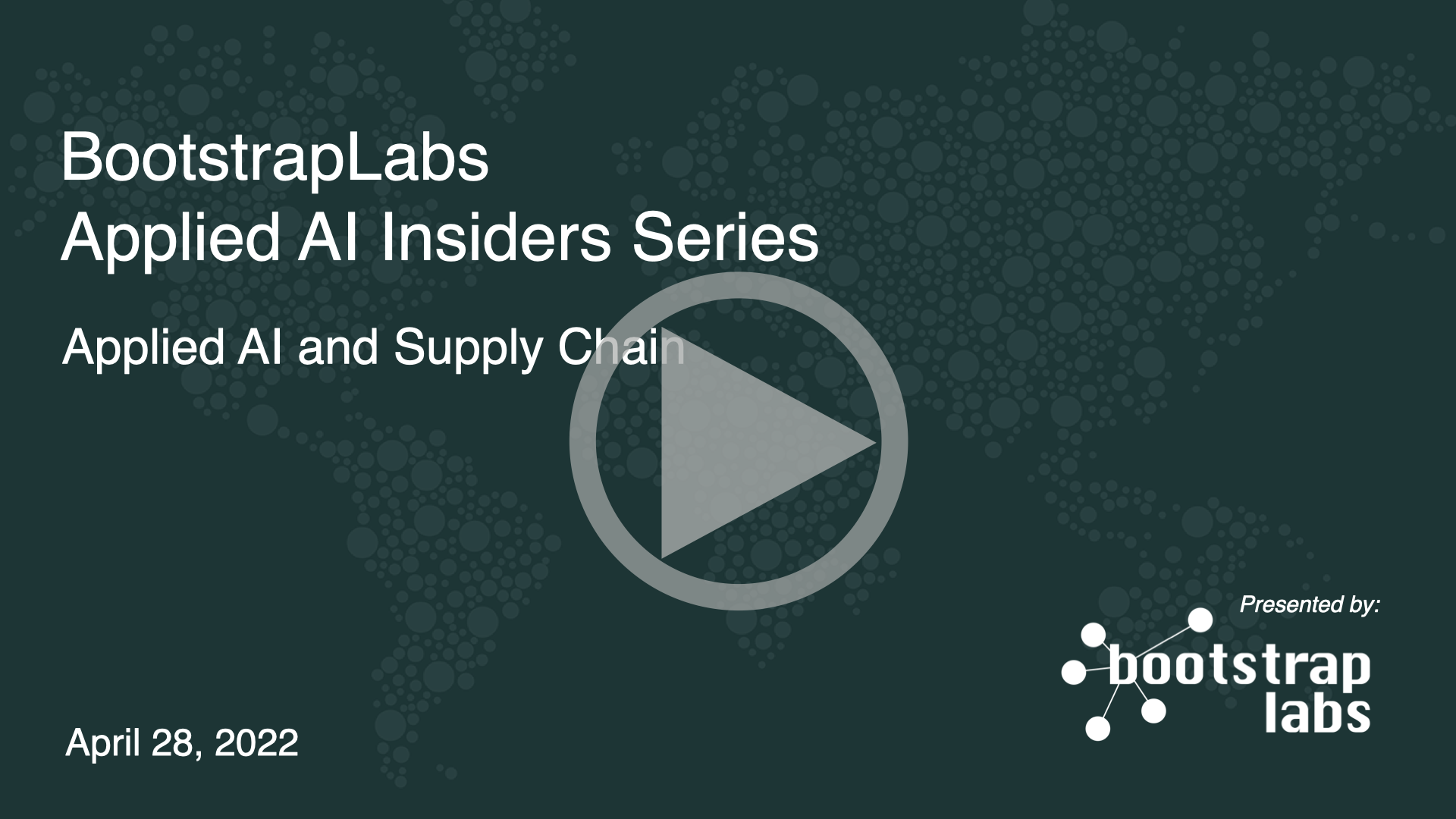