Victoria Silchenko recently posted an article on LinkedIn, Confession of Venture Capitalists: How to milk a Unicorn where she interviewed some high profile VCs and Private Capital experts on the recent “private IPO” trend. Great topic, catchy title and excited that BootstrapLabs will be joining the discussion live at her upcoming Global Alternative Funding Forum on November 6th in Los Angeles. Don’t miss it!

Having lived in Silicon-Valley for over 16 years as an entrepreneur, investment banker and tech investor, I have had the privilege to work with David Weild, count Will Bunker among my friends and co-investors, and have met with both Tim Draper and Andrew Romans.  And I cannot help but wonder what the impact of these billion dollar companies going for Private IPOs will be on the liquidity cycle of Venture Capitalists.

I will skip some of the basic premise nicely outlined (or should I say revealed) by David Weild on his research paper, Why are IPOs in the ICU? and outline some of the basic benefits provided by standard IPOs:

Now, let’s take a look at the benefits provided by “Private” IPOs:

Unicorn are not overnight successes. As the saying goes in Silicon Valley, Overnight Success takes 10 years! Unicorn Valuation Surge in the Private Market:
This is a one year old chart: Uber is now worth $10Bn more! Are Later Stage Investors Valuation Insensitive Due to their Preference?

Andrew Romans had an interesting point in Victoria’s article in that the last money in gets liquidation preference (and sometimes anti-dilution protection in the event of a down round). That would basically make those investors valuation/price insensitive as they would get their money out first in case of trouble and that the valuation of these companies would likely not fall below their investment amounts to begin with. But in case of Qualified IPOs, these liquidation preference would go away and even if the opening price is higher than the last round of funding valuation,  nothing would prevent the stock from tumbling down. See this good post on IPO down rounds.

Another risky dynamic at play here is the liquidity provided to insiders as part of these later rounds. In a public setting, if an insider sells his shares he would need to disclose it to the public; but in those mega rounds of financing,  only major investors are posted on the transaction structure, leaving out of the loop a lot of people inside and obviously outside of the company. Wouldn’t you think that knowing that the founder(s) of your company have locked in some of their gains would be important news?

While M&A still represents between 90 and 95% of the return on capital for VCs, the list of potential acquirers for Unicorns is shrinking by the minute as their valuations are significantly higher then those of the very incumbents they seek to disrupt. As an example, Group Accor ($9Bn market cap.) can no longer buy AirBnB ($25Bn). Ultimately the Losers are Public Institutional and Retail Investors

Maybe a good way to look at what is happening is by drawing a chart with valuation against time, with a typical Unicorn curve, pre- and post- IPO. In that context, it is pretty clear that a lot of the growth and value that was once captured by public investors (including you and I as retail investors), is now being captured by the late stage growth and cross-over investors, while increasing the risk/return profile of Unicorns in the public market once their valuation has been “maxed out” in the private market.

VC firms are flushed with $75Bn of dry powder
so you can bet they will want to party on! I remember ringing the bell at the NYSE in 2009 with my startup InsideVenture, for the launch of our new product, dubbed “HPPO” for Hybrid Public Private Offering. At the time, VC-backed IPOs and Wall Street in general had ground to a halt after Bear Stearns and Lehman went down. We talked about ways to fix the IPO market and “orderly transition” of the cap table with top VCs such as Ray Rothrock from Venrock and Scott Sandell from NEA.

Ringing the Bell in 2009 at the NYSE for our Product Launch:
HPPO – Hybrid Private Public Offering With new regulations such as Reg A+, allowing private companies to crowdfund up to $50M and trade their shares on secondary markets, it looks like the future might be just that, a world where public investors are finding their way back into ventures, earlier in the growth curve!

As Bill Gross told us last Thursday, “Timing is everything”…we were just 7 years too early! 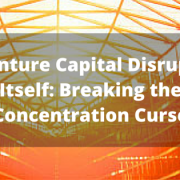 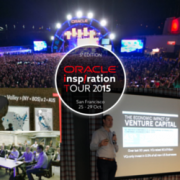 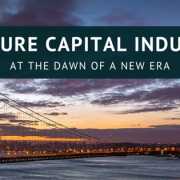 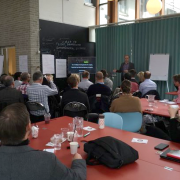 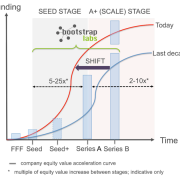 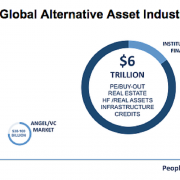 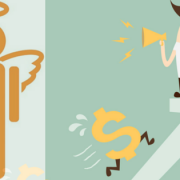 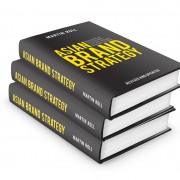 Are You Ready To Build Your Start-Up Brand Early?
0 replies

Are You Ready To Build Your Start-Up Brand Early?
Scroll to top